What’s Inside: Naturally sweetened with dates and dusted in spicy cinnamon, these AIP, Paleo, gluten-free snickerdoodles are soft and chewy. Cozy up with wintery cookies on a chilly afternoon with a cup of tea and warm socks.

What’s So Great About These Gluten-Free Snickerdoodles?

Well, that’s a loaded question! Where to begin …

I guess we can start with the fact that these sweet, spicy cookies are easy to make and will satisfy a sweet craving, without the junk. Trust me, you won’t miss the sugar-laden snickerdoodles of your childhood. This grown-up version is adult- and kid-friendly, as well as AIP- and Paleo-friendly, too.

Some key ingredients in this gluten-free snickerdoodle recipe include tigernut flour, dates, and ceylon cinnamon. You’ll learn more about them below, but believe me when I say they are game-changers when it comes to making healthy cookies that taste as good, if not better, than what you ate before embarking on a Paleo/AIP diet.

What Exactly Is Tigernut Flour, and What’s the Best Way To Use It?

If you’ve gone gluten-free, then you know just how many variations of four are out there — almond flour, arrowroot flour, coconut flour, cassava flour, just to name a few. But what about tigernut flour? This might be a new one.

Let’s start off by saying that a tigernut isn’t actually a nut like the name implies. It’s a small root vegetable that grows in the Mediterranean and North Africa that is naturally gluten-free, AIP-, and Paleo-friendly, offering those with nut allergies a safe flour alternative. Yet, it has a subtle nutty flavor!

This grain-free flour has become a trend in the natural foods space and is beginning to make its way to store shelves across the U.S. more regularly. So even if you haven’t spotted it out in the wild just yet, just you wait! In the meantime, I find it online here.

Tip: I highly recommend sifting Tigernut flour before measuring it in cups, I like to do this in a large mixing bowl using a fine-mesh sieve or flour sifter. It’s worth the extra few minutes to kick the clumps out and ensure it bakes well (also it saves you on waste and you end up stretching the flour that way).

It’s also one of my favorite GF flours, and I’ve used it in a ton of my recipes, including:

Well, you don’t completely! You just find the best quality sweeteners that agree with your body! You can achieve the necessary sweetness without any artificial sweeteners or excess sugar in this recipe primarily by using Medjool dates.

Not only are dates a low-glycemic natural sweetener, but they also aid in creating a soft, chewy cookie, which was exactly what I craved in this snickerdoodle recipe. Crunchy cookies have a place and all, but I do love a soft-baked snickerdoodle cookie!

The date purée also acts as a binding agent in place of eggs, keeping these snickerdoodles AIP-friendly and vegan.

These snickerdoodles are also rolled in a bit of cinnamon sugar … coconut sugar, that is (which is lower in fructose than traditional sugar)! It’s a snickerdoodle, after all! You can always omit if you need to.

Time-saving Tip: Make extra cinnamon sugar and store in an airtight container on your counter or in your pantry to use when making leftover frozen dough.

What Are the Health Benefits of Cinnamon?

Cinnamon is a wonderful blood sugar stabilizer. If possible, it’s best to use ceylon cinnamon in this snickerdoodle recipe, but regular cinnamon is fine, too. Just don’t omit it! This is a critical ingredient for these snickerdoodles and cannot be left out. It’s worth a run to the grocery store, if needed.

Nutritional Therapy Practitioner Tip: I love using ceylon cinnamon in all my sweet baked good recipes or desserts as often as I can because it helps stabilize blood sugar. I often use it in savory dishes, too! This is a staple spice in my cooking because of the rich, unique flavor combined with the nutritional benefits. It’s also safe on the elimination phase of AIP!

Store any leftover cookies in an airtight container at room temperature for up to six days on the counter. (But trust me, they won’t last that long!)

These gluten-free snickerdoodles can also be frozen raw as dough or as fully cooked cookies.

Tip: You can also freeze the raw dough in evenly sized balls so that you can just take out as many as you would want at a time to roll in the cinnamon sugar and bake at your leisure.

What To Serve with Gluten-Free Snickerdoodles

These snickerdoodle cookies are the perfect chilly weather cookie. Cozy up a couple of them, warm socks, a good book, and one of these wintery drinks: 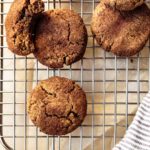